MintCoin is a Community maintained coin since 2014 the original code base was NovaCoin. It's ownership is passed from developer to developer throughout the years and as you know or maybe don't know is that the current MintCoin admin and dev team has been formed on July 2018. If you are intrested in the history and vision of MintCoin then hear it directly from our head developer Shane in this podcast Live Q&A with MintCoin on YourCryptoDaily

Being an old coin also means having a large blockchain and the original wallet didn't handle that well. If you search for  "MintCoin Wallet" you find a lot of hits confirming it's instability. It has been 2 years since an update has been published and we decided that we need to improve the stability before we can build on MintCoin. And that is exactly what we did with the release V2.1.0 MintCoin Development Update 2018-09-01. We also added dns seeding inside the wallets functionality to improve it's connectivity.

Our own managed blockexplorer was also a piece missing for our coin setup and has been setup in the mean while. At the moment of writing it is still synchronizing on the network

The whitepaper ( and we wouldn't be MintCoin if we didn't call it greenpaper internally :-) ) as everyone calls it, states the vision and perspective of  every coin, and that works out for most coins that are corporate based. They have a single goal in the expertise field that they are working in and you can describe that perfectly. Unfortunatly that doesn't work out for MintCoin as the community is the actual driver of the coins future and direction and that is what we call a "Living Roadmap" MintCoin's roadmap changes when the community that drives it changes. That is also the main reason why we took our previous whitepaper offline as the current team wasn't 100% confident of what was stated in that roadmap was 100% what the community initended.

The ‘Living Roadmap’ is arguably the flagship feature of MintCoin, and what will ensure the Mint vision is preserved for decades to come. The direction of MintCoin is decided by a global democratic mechanism. Millions of coin holders will determine the altruistic, green causes for MintCoin to pursue. The people powered nature of the ‘Living Roadmap’ will foster a stability and legitimacy the likes of which as yet unseen in cryptocurrency. Today MintCoin has one of the fastest-growing and most vibrant communities in cryptocurrency. The idea of the coin is that if mass adoption occurred, it would transform efforts to fight global environmental issues.

And we made a minty one-pager for this 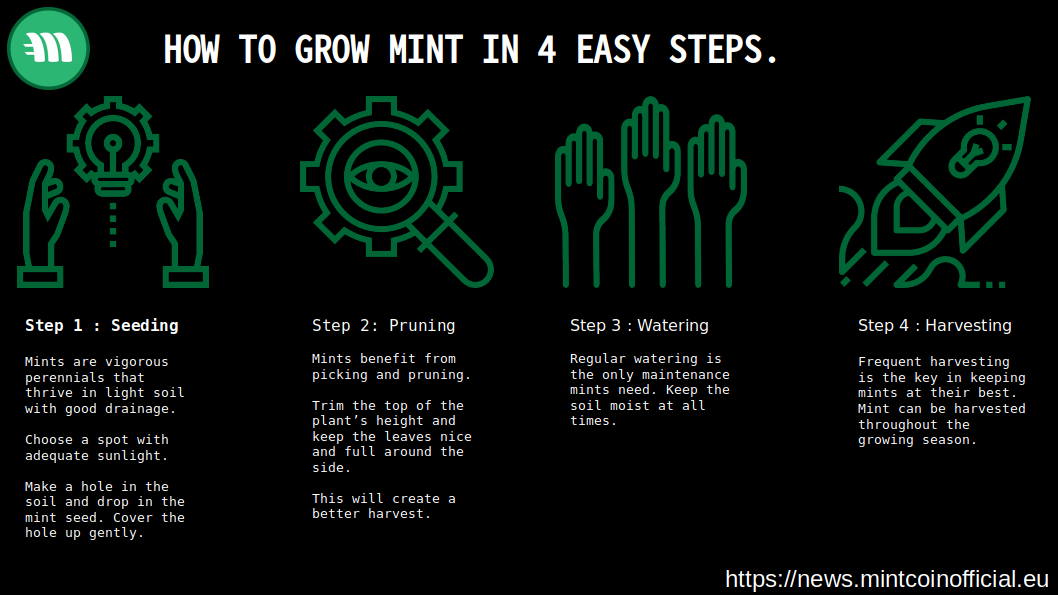 The idea for the ‘Living Roadmap’ is simple, but the process complex. In all, each Living Roadmap cycle will take 4 weeks from submission to project start. The community can submit projects in the form of crowdfunding projects. These can range from environmental projects (for example funding the construction of a specific wind energy plant) to blockchain-related ideas (for example improving transaction speeds) to media-related plans (for example developing a simple Mint-game, or mobile app for MintCoin).

When submissions are done, a MintCoin committee has 4 weeks to assess each proposal with a difficulty rating and suggested cost. When this is done, the project will be published for the MintCoin Community to vote. MintCoin holders donate to the wallet address of each idea/project they want to see executed by the project owner. After the voting process is complete, the money from all the losing projects will be returned to the Sender except for anonymous votes they will be send to the MintCoin Developer Fund. One High Difficulty, Three Medium Difficulty, Five Low Difficulty Ideas will be selected as winners by the community. These are the goals that MINT will seek to accomplish for the next year depending on the project plan for larger projects.

We've unlocked the "Living Roadmap" features for the press on our platform for you to review.

Access the "Living Roadmap" clicking on the following buttons. 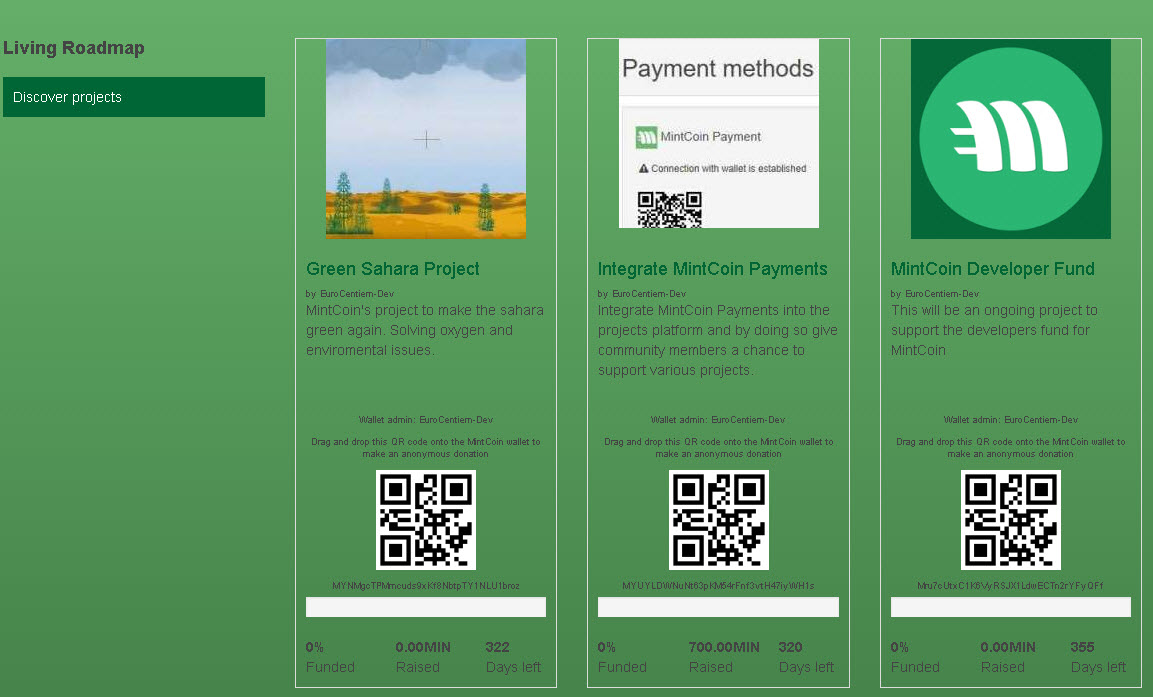 In the first 3 months only the MintCoin team can add projects to the Living Roadmap. After this staging period it will be possible for every community member to add a project and use the existing MintCoin infrastructure and investor network, to expose their idea and to share it on social networks, friends and investors to source funds.

We believe that with our "Living Roadmap" MintCoin will become one of the first successfull Community driven coins where the future of the coin is not decided by a management or a dev-team but by the community itself.